It's a sandbox survival game with a focus on realism … more or less. Like in many similar games, it's about mining and building. The focus lies especially on ores and smelting. There are many different ores, and ore deposits are much larger (but also rarer). Smelting ores and crafting new tools will take much more effort than in other, similar games. But it's also much more rewarding when you have found a new ore! :-)

Getting started in this game can be quite difficult, as it does quite some things in an unique and non-obvvious way, so you should read the README file.

This game is a revival of The RealTest Game from 2012, the goal is to make it compatible with Minetest 5.0.0, to make it playable again and to fix bugs (hence the additon of “Minetest 5 Edition” to the name”).

It's mostly about preserving a piece of Minetest history. Therefore, the gameplay is exactly the same as in the original. I do not intend to make ANY changes in gameplay, even if it might be quite lacking by today's standards. The game is very old, it was originally released in 2012.
The point is to stay true to the original. However, I have added a bunch of convenience features, to make the controls a bit better. This includes addition of a crafting guide.

Useful links:
+ Spoiler
This game is free software. It has been licensed under the GNU GPL version 3. This game was originally created by sda97, who did most of the work. My role in this is just a bit of cleanup.[/list]
Last edited by Wuzzy on Sat Jul 11, 2020 20:09, edited 5 times in total.
My creations. I gladly accept bitcoins: 17fsUywHxeMHKG41UFfu34F1rAxZcrVoqH

That's so cool! Nice job Wuzzy!
I like to make mods :D
I also made a patreon!

First it looked like April 1st joke but looks like it's not, the game looks pretty nice, haven't tried yet, but I will!
COME SEE MY MINETEST MAP!!! FRANCAIS TRADDUCCIONS COMING SOON! ČESKY PŘEKLAD JIŽ NEDLOUHO!!!

Wow, yet another title from The Resurrector of Dead Games. Thanks for all your efforts.

I'm still suspicious of this being a joke. :)
Thanks for another game brought back Wuzzy! Now if only Minetest can include some games by default, finally :P
If you want realism, you're in the wrong place. Get off your mobile.

The directory show_wielded_item is empty, so the game won't load unless it is removed. Also it defaulted to singlenode when i first created a new world, which is pretty funny, so you might need to make sure v6 is selected.

Cannot restart game in this state, crashes with the same error. Realtest 1.0.0 ( i had not seen the updates until now).

This is a really cool game!

Bugfixes: Thanks, goats, for reporting the bug.
My creations. I gladly accept bitcoins: 17fsUywHxeMHKG41UFfu34F1rAxZcrVoqH

Yesss, they finally revived it. This might bring me back to minetest a little (my current PC is too laggy to run terrafirmacraft on minecraft, and cannot buy a new one until the quarantine ends)
My modding team: https://github.com/basilea-rhomaion

The frick? my internet lagged and made me think the first post did not send (put me in fullscreen editor). It has been a while since I used these forums, how do I delete this post?
My modding team: https://github.com/basilea-rhomaion

The forums have some really bad errors lately. Yes, something is very wrong at the moment. :-(
viewtopic.php?f=3&t=24504
My creations. I gladly accept bitcoins: 17fsUywHxeMHKG41UFfu34F1rAxZcrVoqH

Compability notice:
This game works in Minetest 5.0.0 or later.
This game is also functional in the latest Minetest release 5.2.0.
My creations. I gladly accept bitcoins: 17fsUywHxeMHKG41UFfu34F1rAxZcrVoqH

Thanks, Wuzzy. Current debug level is action, but the crash is fixed. Still not sure why the furnace thought there was an un-cookable item in input... I was moving output to inventory at the time.

@ Diamond knight - The forum has been pretty wonky lately, and very laggy. I don't think it was network latency with your ISP. I don't think you can delete a post, but i can't check to confirm as there are no longer edit buttons on my prior posts. o0

I tried this yesterday and found a crash when using the version from master (I didn't realize I wasn't using the released version). I searched a bit and found that the use ephemeral sounds commit breaks fire, bonfire and furnace as those expect a handle to be returned from minetest.sound_play function and when using ephemeral=true it won't return a handle. Removing the ephemeral parameter on those calls seems to have fixed it for me.

Thanks for updating this game. I'm liking it very much.

Great that that game got revived. It's a lot of fun to play, even though there are parts that ought to be added. All those metal tools cry for armor beeing added, and a few mobs couldn't hurt. Beds would also be great. Production of more elaborate clothes in a complex way and adding pottery would also be great.

I've edited the crafting school which I had built back on VanessaEs RealTest server and added the missing parts. While the game does contain a craft guide, it does not add recipes for items the player hasn't encountered yet, and there are no hints as to how some things in the game (i.e. getting your first cobble, how to fell a tree, the mysteries of the anvils) work. Guessing game mechanics isn't that much fun. For those who havn't played RealTest before: Please take a look at the Caveman's Crafting School! You can add it to your world with WorldEdit. If you're looking for something specific: I've also updated mg_villages and handle_schematics so that they work with this incarnation of RealTest (the old RealTest was already supported). Here's a sample house from a village: 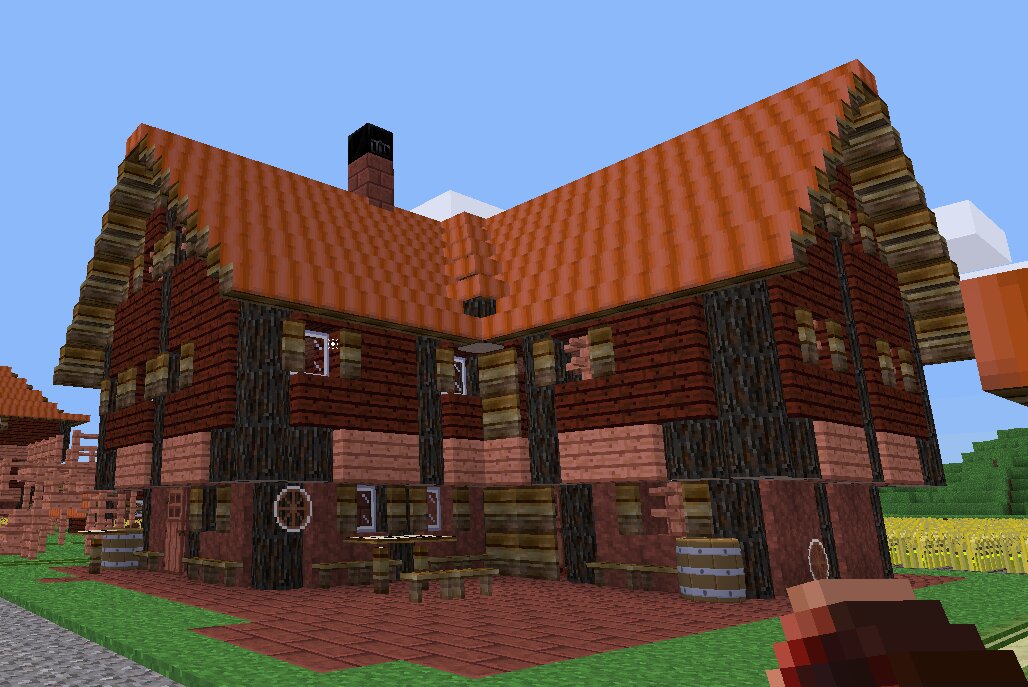 While working on the update for the crafting school, I found the following small bugs that crash the game:

realtest_crafting_school.jpg
(93.93 KiB) Not downloaded yet

Hey, thanks! :-)
I agree there ought to be more stuff in this game, but as I said, I don't plan gameplay updates. Especially more uses for all the ores.
It's on minimal life support and basically just to “preserve history” (even if the historic state is kind of incomplete) in a playable state. Thanks for the bug reports, tho, I will take those seriously.

If someone wants to turn this into a better game, I recommend a fork (and also a rename).


While the game does contain a craft guide, it does not add recipes for items the player hasn't encountered yet, and there are no hints as to how some things in the game (i.e. getting your first cobble, how to fell a tree, the mysteries of the anvils) work. Guessing game mechanics isn't that much fun.

I agree. The crafting guide is not enough. That's why I added a README. Reading the README is kinda mandatory if you want to play, this explains the more obscure gameplay mechanics.

Strange, I have not been able to reproduce the seaweed crash yet. Can you give more context, please? Also, a crash log.
My creations. I gladly accept bitcoins: 17fsUywHxeMHKG41UFfu34F1rAxZcrVoqH

Thank you for this! I confess that a few adds like mobs etc would be cool. I had never seen this game, my first impression on what is presently in is that it is really cool!

Thank you so much, Wuzzy! Wow, I can still remember playing the old game when I was still in school...
I agree that a little extra stuff wouldn't be bad, especially I'm missing the farmable veggies from the maingame - I'm afraid the latest minetest versions spoiled me a bit^^. Let's see, maybe I can adapt some old farming plus mod or something similar to the game.

great to see this game still around.
It is indeed still one of the more important games as it shows how things can be done differently from the mainstream line of mt games. Of course that has always been it's problem as even seasoned players of mtg and derivats of other games based closely on the game mechanics made popular by minecraft and clones thereoff had to learn how this game works. Giving information about progress paths early has always been vital to keep people attached to the game.

Maybe a seperate "expansion pack" taylored for the needs of this game might be the best way to keep the original as "pure" as possible.

btw, does this version also include stuff from Dan Duncombe's version that was used on Vanessa E's server?

twoelk wrote: Maybe a seperate "expansion pack" taylored for the needs of this game might be the best way to keep the original as "pure" as possible.

Perhaps. To some degree at least. However, changes to the game might eventually also be necessary for new mods to work.


twoelk wrote: btw, does this version also include stuff from Dan Duncombe's version that was used on Vanessa E's server?

I think so. It does include the craft guides in anvil and joiner table which I had added pretty late on. Hope the rest is equally current.
A list of my mods can be found here.

So, I have tried to make Mobs Redo compatible with Realtest by changing some crafting recipes. It worked, however, I can't interact with the mobs. Does anyone have an idea what the problem is?
Post Reply
31 posts