Have you ever died and been frustrated with being unable to find your way back to your corpse? Carry a death compass with you. When you die the compass will use its dark powers to respawn in your inventory and will be magically bound to point its bony finger toward the location of your demise. 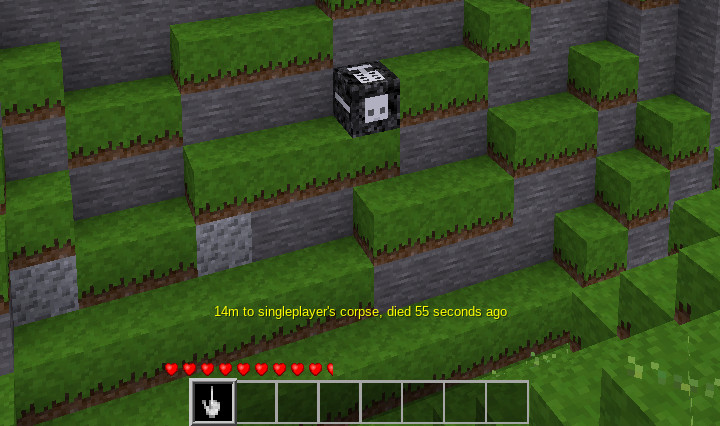 But hurry! The server administrator may have limited the duration that the compass will function for.

Crafting recipe: four bones and a mese fragment. And possibly a fragment of your soul.

Alternately, there is a configuration setting (false by default) that automatically gives a player a death compass whenever they die. This automatic compass will disappear back to wherever it came from once its grim task is complete.

Death Compass is released under the MIT license.

Cool concept. I think a description hint might help it out a bit. I had to come back here a second time to figure out how to use it. Its in Sara's Simple Survival Server now. Seems to work well. I limited it to 30 minutes. Nice one.
FreeGamers.org Forum | Source Code

Right-clicking anywhere with the inactive death compass will now send the player a brief explanation of what it's for.

Hope that explanation made sense. :)

An unfortunate side-effect of how the game handles changing the properties of the held item. Whenever the item's properties are changed the game thinks you've swapped out a whole new item (which you sort of have, technically speaking) so it plays the animation. Since I've got the distance to your corpse and also a countdown timer in the item's description string that means the item is almost continuously changing.

I'm not aware of a workaround for this. I've seen the same behaviour in various compass mods (this particular mod's codebase started out life as calibrated compass) so if there's a workaround it's not widely known. I could investigate taking the distance and countdown out of the description string and putting it in the HUD instead, though, that would make the item only change if the direction it was pointing changed.

Edit: Done, I've moved the descriptive string from the item itself into the HUD. It's more visible this way too, so I think this is a net improvement rather than just a bugfix. Thanks.

Your compass mods have the same issue! :-D
Day 42 of the quarantine

I thought it was a weird at first, but of course once you realize its just swapping out items and textures and that is what is giving the dynamic appearance of the textures, it makes sense and is acceptable.

Just leave it in the hotbar and don't worry about it to much. I've never heard a single complaint from a player about any of the compasses like that actually. Quite unusual, but I suppose that is a good sign!
FreeGamers.org Forum | Source Code

I was made aware of a item duplication bug with this mod by a few players. Someone has finally given me the method to recreate:

It is being discussed here: https://www.freegamers.org/d/159-death- ... duplicated

Here is a quote:

mistere wrote:I saw that that was in the to-do list... It is duplicated simply by dying. If there is a death compass in the player's invetory when they die, the mod places another death compass in their invetory but does not remove it from their bones. When they get their bones, they now have 2 compasses. It is a horrible curse... Your inventory fills up quick... I have seen bones FULL of them...!

If there are other mods dealing with on_dieplayer inventory manipulation I could add a more generic fix that should ensure death_compass' on_dieplayer *always* runs first, regardless of other mods, but I'm reluctant to get hackier than I already am being here. :)
Post Reply
9 posts • Page 1 of 1