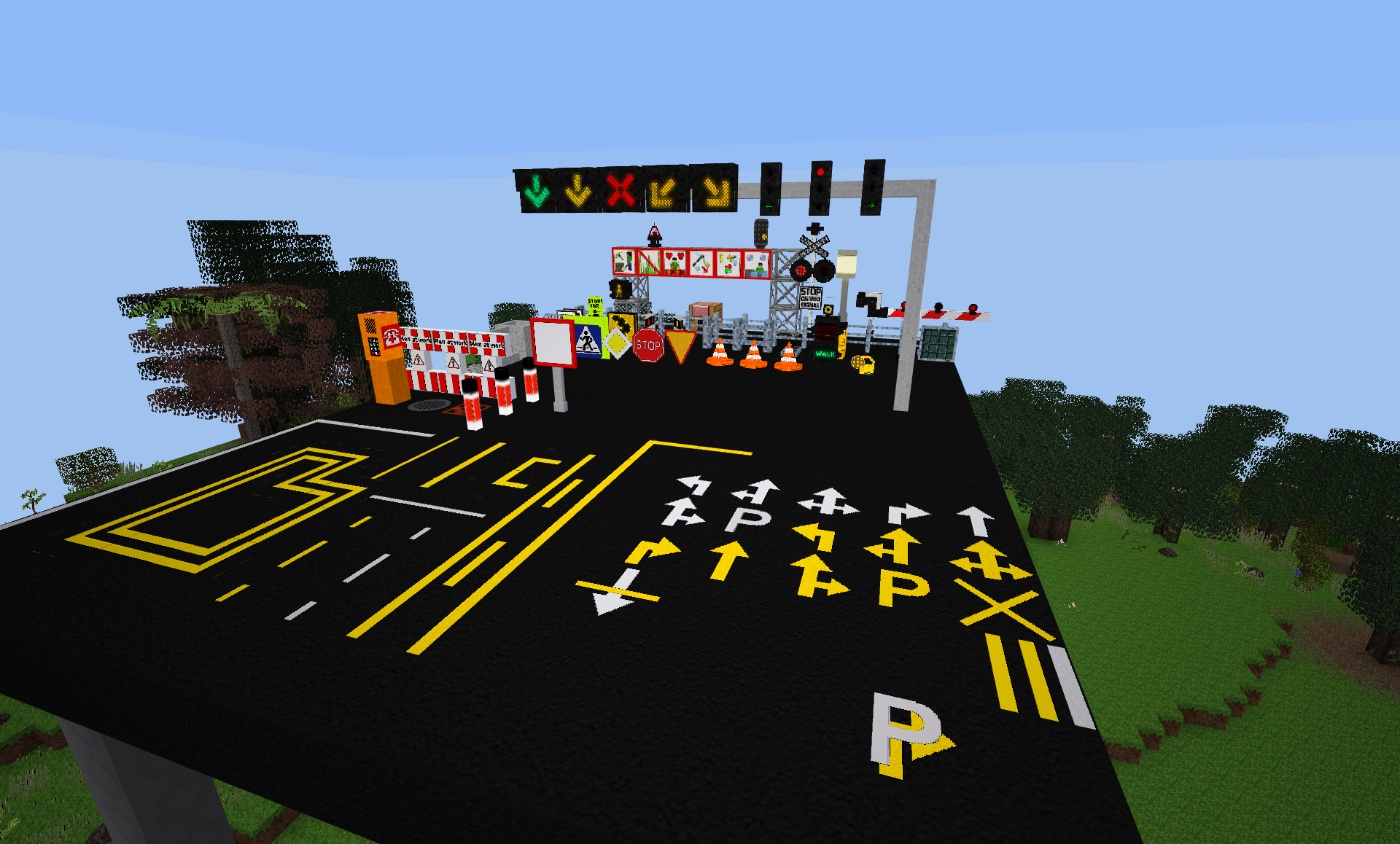 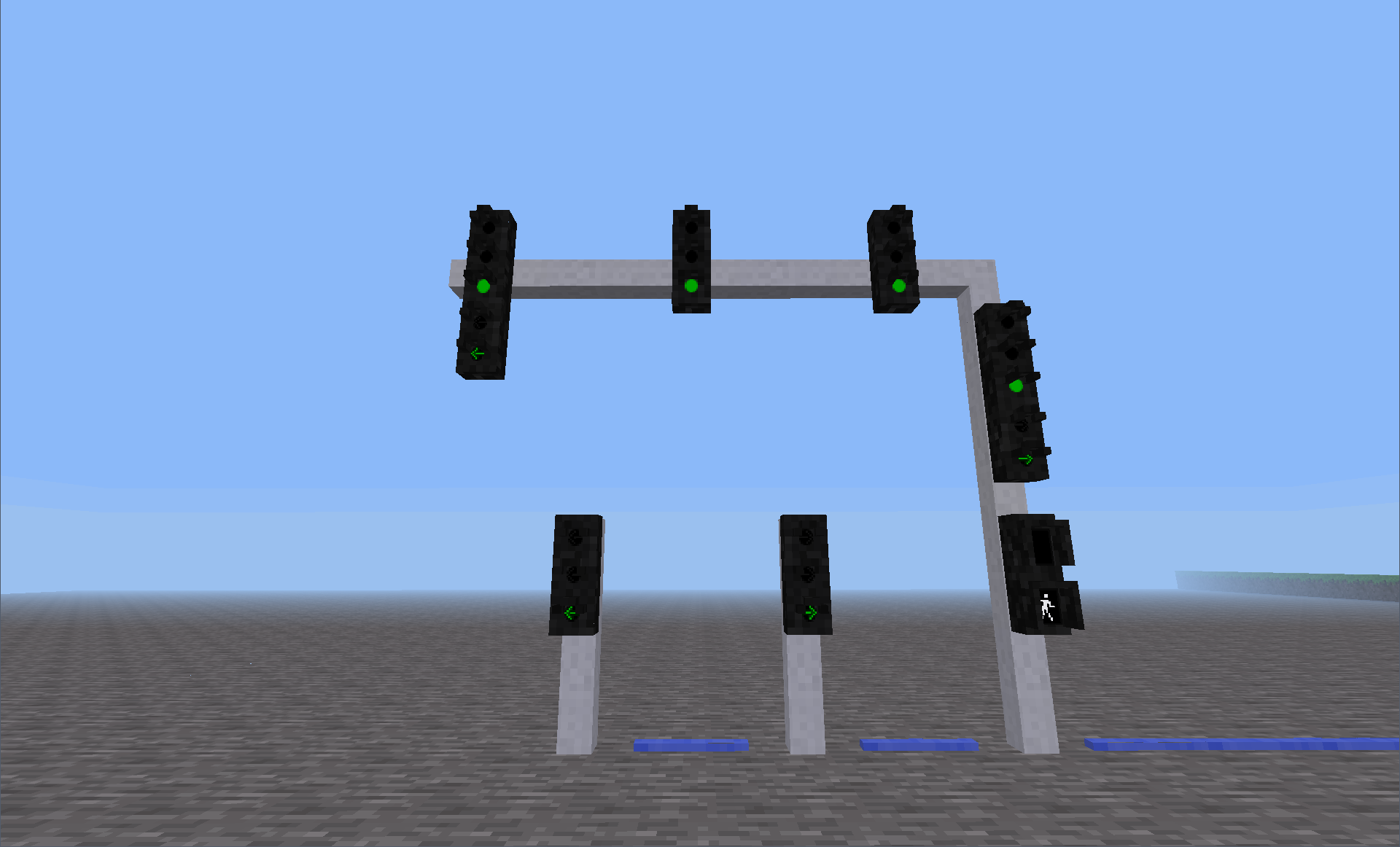 This is a fork of webdesigner97's StreetsMod and Ragnarok's Infrastructure. The main motivation for this was that streets is only occasionally under active development, infrastructure appears to be abandoned, both did not have some features that VanessaE and I wanted, and they could not be used together well if at all.

To be a bit more specific, the two are combined together with some tweaks, and many other changes have been made, including but not limited to: This is also the version of streets that is in VanessaE's dreambuilder modpack, as well as on her VE-Creative and VE-Survival servers.

Dependencies:
This mod is intended for use with dreambuilder (which includes it), but if you want to run it without that, you'll need the following mods installed:
building_blocks
moreblocks
concrete (from technic)
wool (part of minetest_game now, I think)
mesecons
digilines
prefab
homedecor (for crafting)
default (for crafting)

Download: The mod itself is here, but you will also need to download this and extract it to the streetsmod/libs folder.

Source: https://github.com/cheapie/roads
Submodules are used, so you will need to do a recursive clone if you want to do it this way.
Last edited by cheapie on Mon May 23, 2016 02:07, edited 10 times in total.

An update to the streets mod?

Just discovered this fork, interesting! :) Btw, streets is not dead, I'm just too busy to work on it...
Visit me: webD97.de | @GitHub | @DeviantArt
Mods: StreetsMod | Vehicles
Featured from my blog: Dockerize the Minetest server
On my own behalf: Chameleon - A PHP image manipulation library built around GD

For e.g. I don't use homedecore, so saying that it needs building_blocks isn't very useful, and the prefab mod isn't very well known (or up to date) so finding it takes some digging.

If you could put links up for those mods that'd make it much easier to install your mod.


An alternative would be to include place holder items/alternative crafting recipes so that it supports multiple mods (Like X-Decor/Workbench vs Homedecore/Moreblocks)
Social: YouTube Peertube Matrix Room: #minetest:matrix.org | Games: The Infinite IKEA

Cheapie, you really outdid yourself with this incredible effort of yours. People come and go, but keeping the mods that they left behind up-to-date really does benefit both the community and the modders.
You can now find my videos at BitChute: https://www.bitchute.com/channel/some_cheeky_jinuskian/

More types of traffic lights (5-section protected/permissive left turn along with pedestrian signals) have been added. There's a new screenshot in the top post showing all of them.

Beacons (regular and hybrid) have also been added. I forgot to mention those last night. 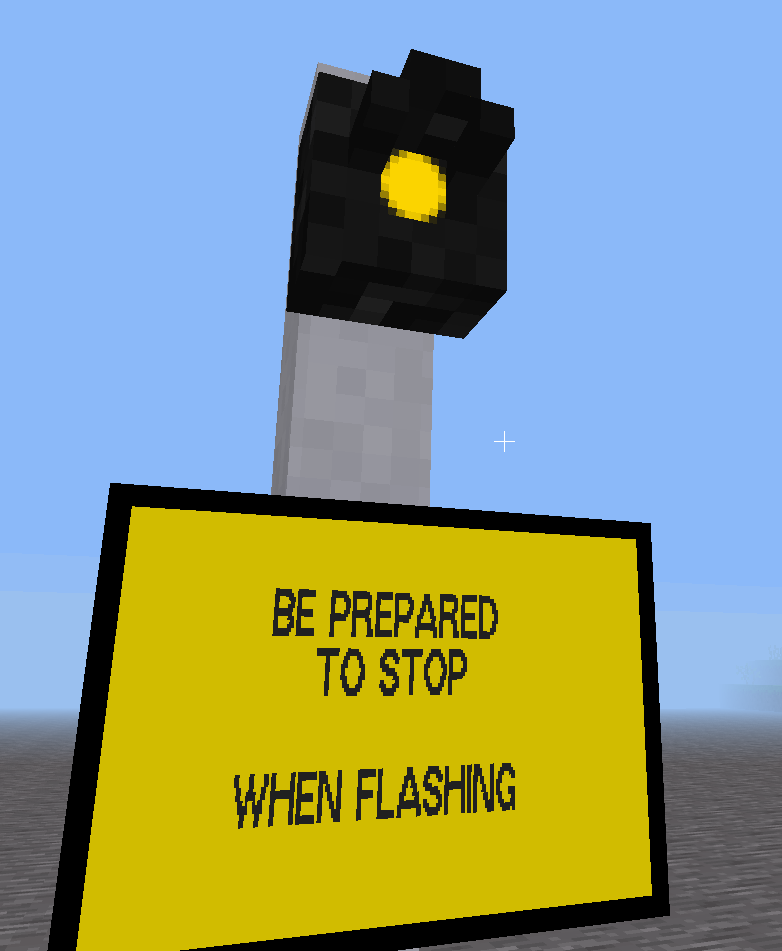 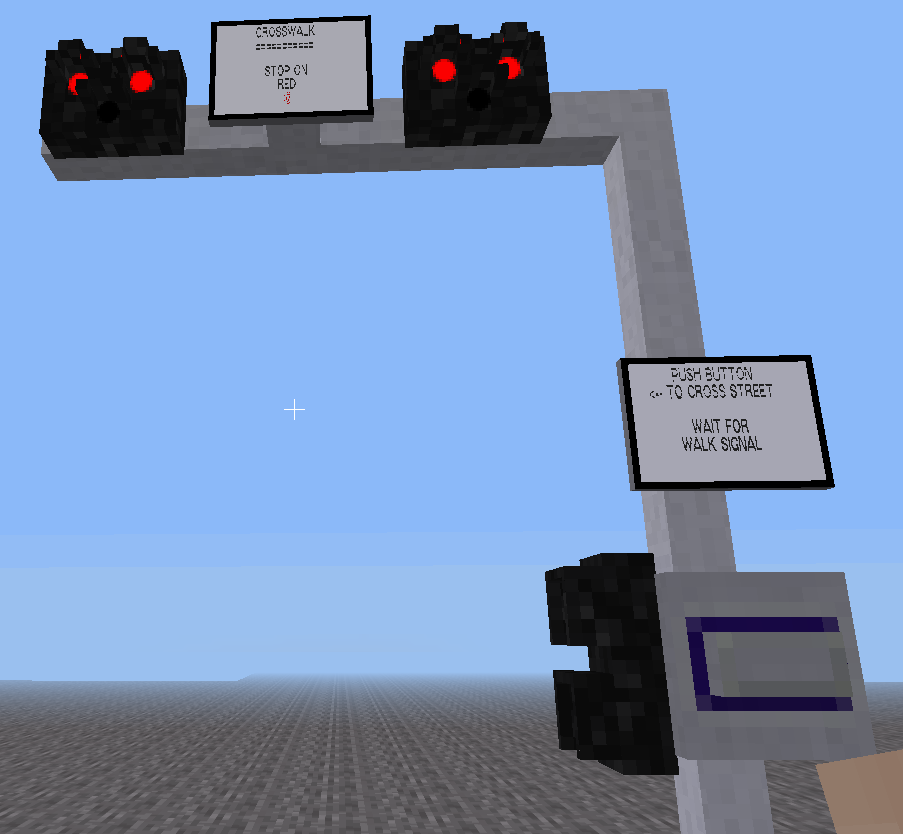 TheReaperKing wrote:Just FYI your direct repo link is missing your name in it. 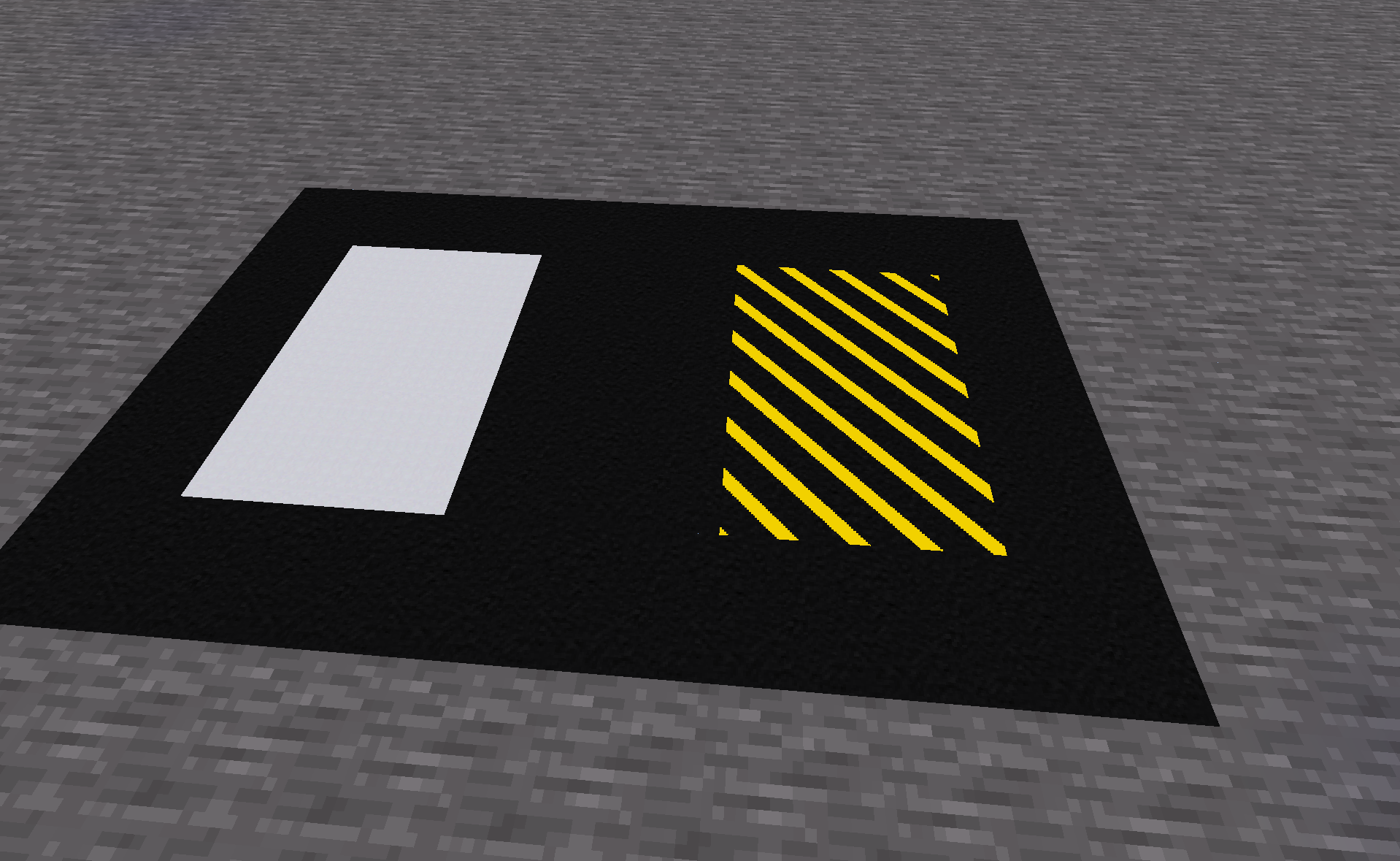 All-white (for making patterns and such on a larger scale) and diagonal yellow lines. Note that since these nodes (like other markings) use facedir, the screwdriver essentially has the effect of changing which way the lines run, if you want them to go the other way. 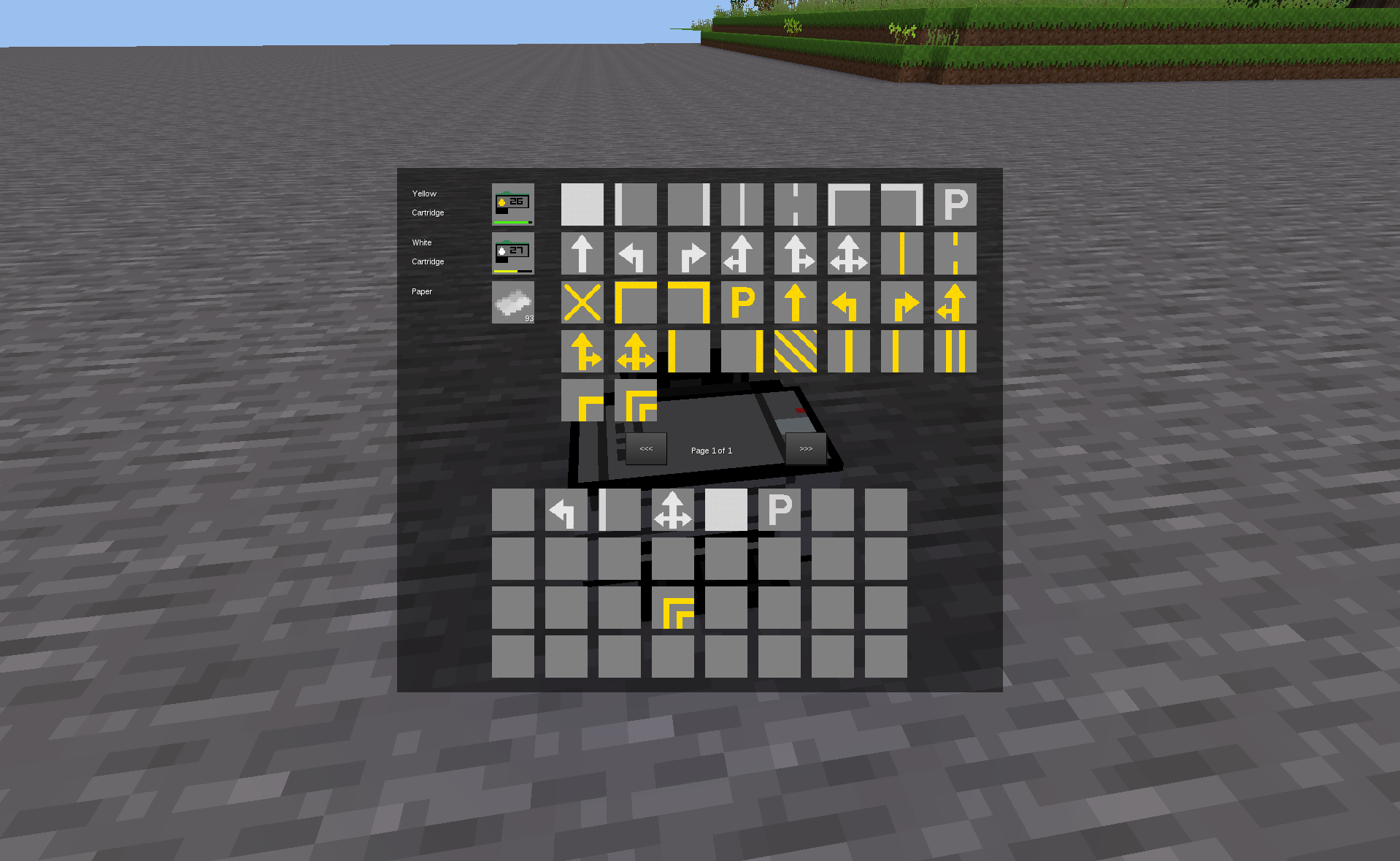 I've also changed the markings to use a "printer" (with paper and craftable "ink cartridges") instead of a whole bunch of craft recipes.

Thanks so much for your hard work on this, my students absolutely love the mod and soon, they will be using this to create their own city :)
Become A Real Life Superhero - http://SuperheroHill.com
Project Lead of the Doom 3 Mod Last Man Standing - http://Doom3Coop.com
Project Lead of Platinum Arts Sandbox Free 3D Game Maker - http://SandboxGameMaker.com
Youtube Channel - https://www.youtube.com/user/PlatinumArtsKids

yes they will have fun! just missing cars from my mod.
ＯＭＩＣＲＯＮ - pre-release 0.7 "Tweaky Update"

Are there any known mods that could be a substitute for the "concrete" mod dependency? It is the only one that isn't clearly licensed unless I am missing something but searching the forums I couldn't find it. Also I'm assuming your "prefabs_redo" will take care of the "prefabs" dependency. I'm just curious, why did you rewrite that mod?

It doesn't actually depend on prefab any more, and you're supposed to use technic's version of concrete (which I don't think needs technic itself). I should probably update the post.

As for prefab_redo, I wrote that because it was rather confusing having two types of concrete, and in the process of changing that and fixing other bugs, I found that it would take so many changes that it would be easier to just rewrite it.

Thank you for the insight. I have been using the technic version in the past but I'm looking to release a gamemode for my students and anyone else interested and so I'm just trying to make sure I get all the licenses correct. I suppose it'd just follow technic's license hopefully.

I have installed all mods that need for it, but i have got error:

I have installed smartfs, but for some reason "infrastructure" disables itself in modpack roads and i have got one problem with concrete, when i want to cut slopes in circular saw they don`t cut althrough in VanessaE`s creative server slopes cut.Maybe do i need anything mod for it?
My mods: Medicine, Luxury Decor, Cube Nodes, Sweet Machine, Drink Machine

I have installed smartfs, but for some reason "infrastructure" disables itself in modpack roads and i have got one problem with concrete, when i want to cut slopes in circular saw they don`t cut althrough in VanessaE`s creative server slopes cut.Maybe do i need anything mod for it?

Do you have all of the dependencies listed in the OP installed? Also, smartfs should go in the correct location (roads/streetsmod/libs), not as a separate mod.

In some reason after i could install "cristmas_decor" mod the mod was not working. Even when i disabled it and i should all the dependencies i could not cut the slabs from circular_saw and that`s why downer blocks of my railroad look like unknown: Before that event i had even not installed "prefab" and "technic" mods that consider as needy mods in depends and all worked fine.
My mods: Medicine, Luxury Decor, Cube Nodes, Sweet Machine, Drink Machine

What are the orders for the traffic lights? I need everyone.
+ Spoiler
I hate my life