You have stranded on the planet Hades. Use your limited supplies to survive and use terraforming to create a beautiful habitable place.

There's no goal in this game. There's a strong focus on creativity, terraforming and digging. This game is very different from other games, it's not for everyone. ;-)

WARNING: EARLY TEST VERSION! This game is still in the design phase, so future updates will likely be incompatible. 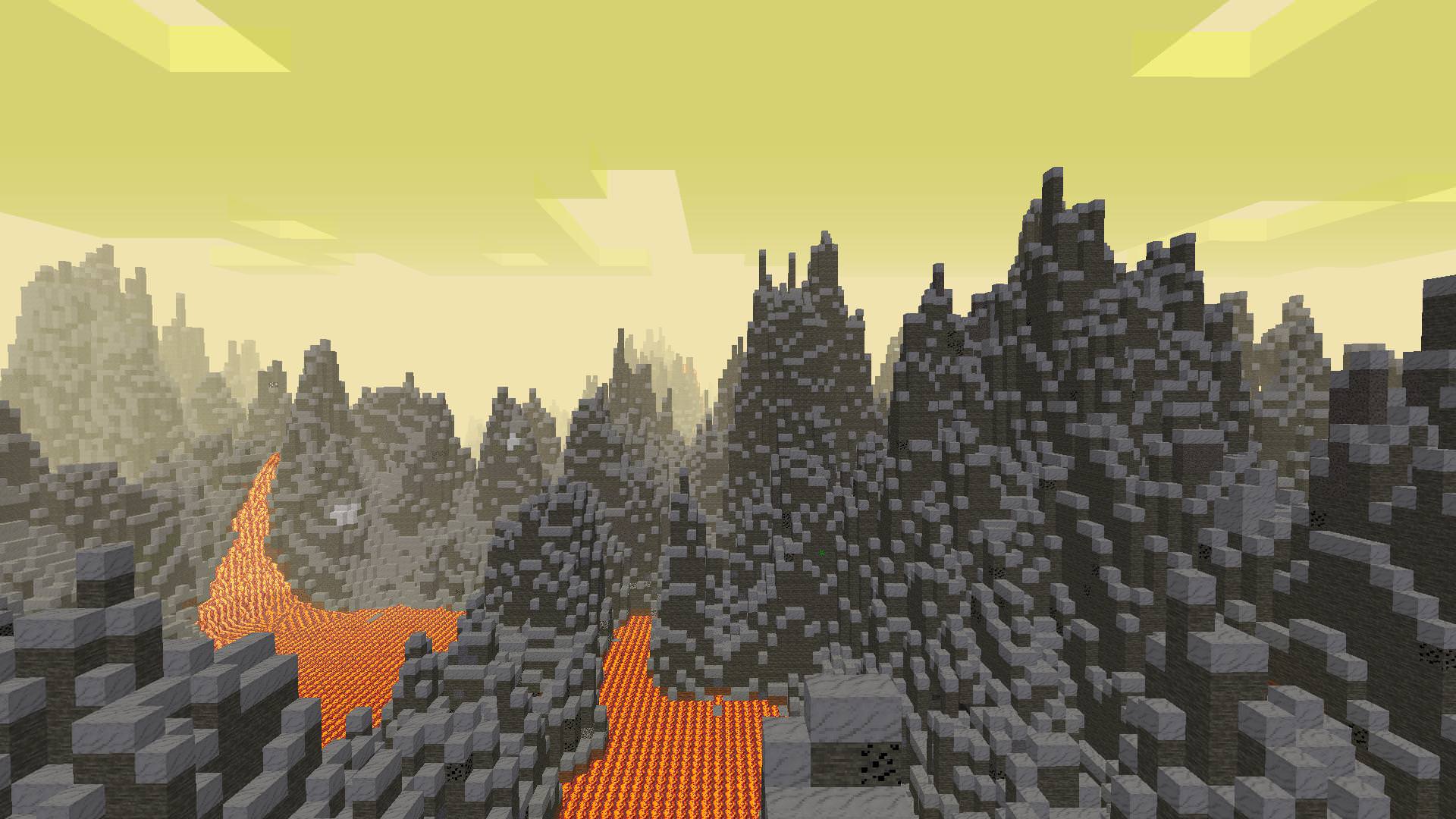 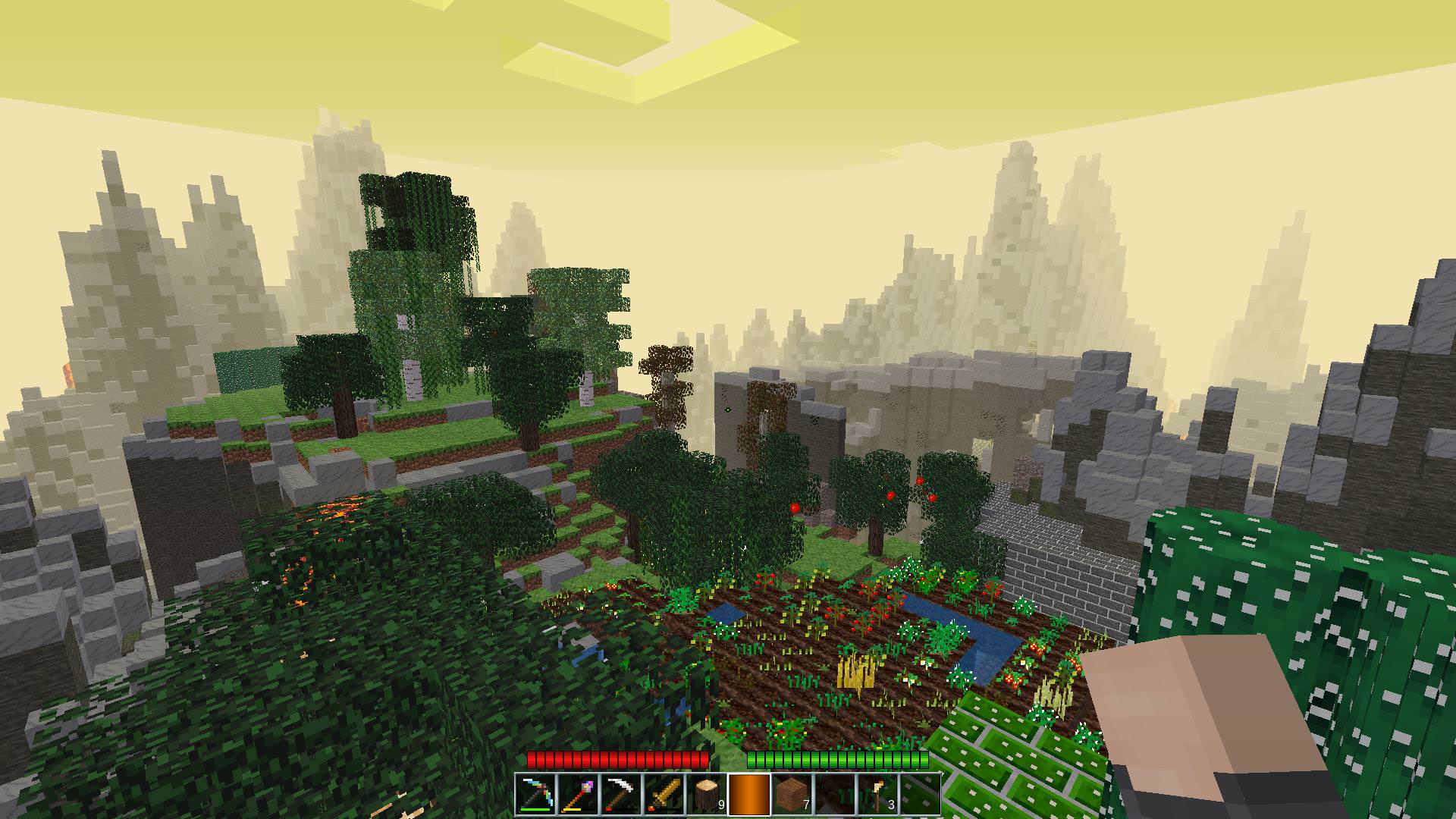 This game is a direct successor / fork of one of my favourite games, Minetest Hades by Glünggi. Most changes have been made to update very outdated things and do various quality updates and use more modern features of Minetest.

Useful links:
+ Spoiler
This game is free software. It has been licensed under these licenses: Some mods have separate licenses: Sorry for the mess, I might clean it up later.

Hades_Revisited_logo.png
(67.54 KiB) Not downloaded yet

I was just checking out the first Hades subgame yesterday, lulz.
What is SCP-055?

thanks for reviving it! the idea of terraforming is really original!
ＯＭＩＣＲＯＮ - pre-release 0.7 "Tweaky Update"

I can't remember the name of the extra furnace here, but it's supposed to cook faster than a normal furnace, how would I code my own set of unique furnaces to cook faster?
What is SCP-055? 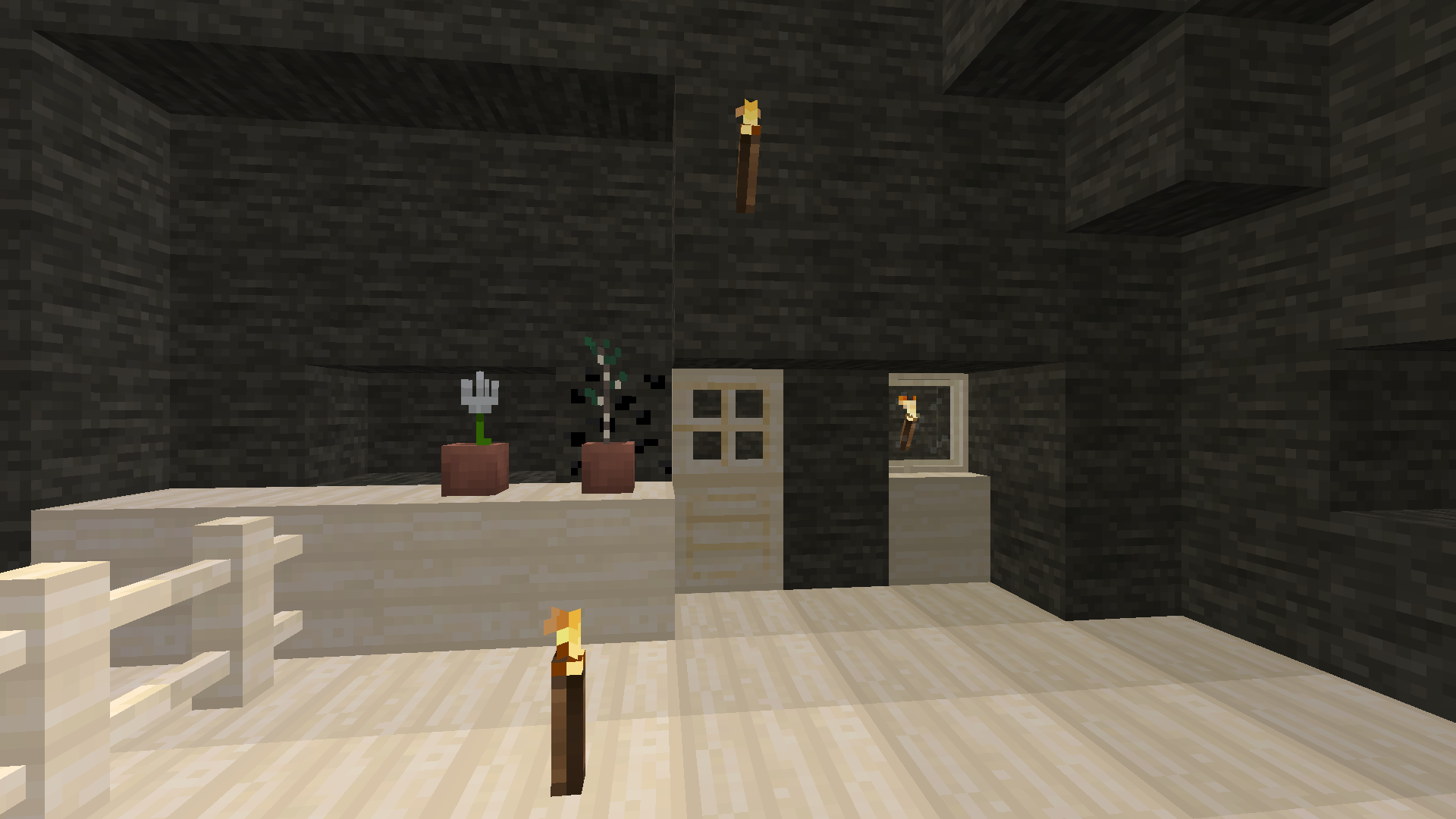 
This game should be pretty stable at this moment, but please report any bugs you find in this thread!
My creations. I gladly accept bitcoins: 17fsUywHxeMHKG41UFfu34F1rAxZcrVoqH

Would it be possible to a stripped version of Ma & Pop's Furniture Mod?
Jesus Is Lord and Savior!!!

That funny Wuzzy, we give you any concept and it looks good and professionnal. Give me something to work on and it's a mess in twelve minutes.
ＯＭＩＣＲＯＮ - pre-release 0.7 "Tweaky Update"

Hades Revisited is only tested for Minetest 0.4.16. I don't go after the bleeding edge.

And yes, I screwed up badly. Here's a bugfix release. Thanks for reporting!
Version 0.2.1 is here!

Changelog: The Ma & Pop's Furniture Mod looks very interesting. It keep this one in mind.

I haven't said it earlier, but creative building will be a big part of the subgame. So adding decorations of all sorts is a nice idea.

Note this subgame currently uses the 3dforniture mod (viewtopic.php?t=2207) for the furniture and it includes some chairs, tables and other stuff. I don't really like the design of this mod. Maybe I replace some parts of it later.
My creations. I gladly accept bitcoins: 17fsUywHxeMHKG41UFfu34F1rAxZcrVoqH

Thank you for this awesome game!

It makes so much fun to see the nature flourishing after the hard work. :D I just started to terraform the big plane in the middle of the map. I hope in some days I can upload a little timelapse of the map evolution...

Any chance of getting the furniture mod added?
Jesus Is Lord and Savior!!!

This feels rather shallow to me. This is a rather exciting topic to make a game on, yet it basically feels just like Minetest Game with this fancy mechanic and nothing else. This essentially a Player vs Environment game, but doesn't touch on any of the interesting stuff such as water sanitation, diseases, radiation, or such. It would be good to have a mod like Unlockable Crafting when it's done, to slowly reveal craft recipes.

I didn't understand how to make fertile sand to start with, and the craft guide wasn't much help. I eventually realised you had to click to show alternatives. Ideally there should be a quest thing on the screen which tells you what to do

Anyway, I guess that's why it's a WIP? Hopefully this stuff will be added at some point
Core Developer | Donate | Join the Matrix chat! | My Twitter | Mods | Minetest Modding Book

I mostly agree. The game is still lacking in content. It's not as terribly shallow as Minetest Game, but still you hit the end of the tech tree eventually. I totally agree that more depth is a must.
The mechanics are also definitely NOT final.

It's still a young game (technically) and still not polished. It's also currently not my priority project. Consider this an experiment.
In the current stage, Hades Revisited is playable, but only for you if you're a creative builder and want to build in an unfamiliar setting. Or you just like to dig a lot. That's it. But this might change.

The vision of the original Minetest Hades game was to create a terraforming sandbox, so the creativity aspect is one big goal here. Survival/challenge is secondary.

The gameplay idea of Minetest Hades was that you unlock more and more technologies to build stuff with. That's also roughly the idea of Hades Revisited.

I don't have a solid plan for this sandbox yet, but a few rough ideas floating around.
I plan to make major expansions to the underground and digging aspect. This part is a big one. I want Hades Revisited to have the most varied and interesting underground to play with.

Later I also plan to make major expansions to the nature aspect. In general it should be harder to grow trees and obtaining a new tree species should be a huge deal.
I also might want to experiment with mobs, but later.
Another idea is to eventually focus much more on technology. I'm leaning towards a complete rework of the crafting mechanic, crafting in general should be more difficult, in this kind of game you should NOT be able to craft everything in the same menu.
I'm also thinking about unique tools or supertools which allow you to dig, build or manipulate many blocks at once, to emphasize the “terraforming” aspect more. But those supertools require a lot of technology first.

I'm not sure whether to keep Mesecons and Pipeworks or maybe to use something entirely different.
I also like to rework some of the existing decorative nodes, especially furniture, to be more consistent. I also like to to have a more industrial/sci-fi “theme”.
I also probably should think of a good multiplayer mechanic early on as I noticed the idea of this game is very similar to JT2, in which players started in an all-stone world and built entire cities from nothing!

Other ideas are some teleportation networks (not cheap), space stations, vehicles, maybe even asteroid layers (for the late game and valueable ores), and the like.

A help system is still lacking as the help texts still need to be written.

A lot of my ideas are not final and I don't even know if this project will ever be finished.
Last edited by Wuzzy on Wed Apr 04, 2018 00:10, edited 4 times in total.
My creations. I gladly accept bitcoins: 17fsUywHxeMHKG41UFfu34F1rAxZcrVoqH

I agree that this should be technology focused - that's why I mentioned stuff like radiation/diseases and such, there's technology needed there to survive it.

To me this feels like an Mars terraforming thing, so lots of technology is good. The Martian is quite a good film which could provide some inspiration.
Core Developer | Donate | Join the Matrix chat! | My Twitter | Mods | Minetest Modding Book

Having played this game for some weeks I like many aspects which are different from Minetest Game and many other [del]sub[/del]Games:
I don't appreciate: Minor issues: Ideas:
I am okay with using the screenshots in all my posts for the website of Minetest (http://minetest.net).

This. The game currently lets you get an absurd amount of food, among all the other materials and terrain. It'd make a lot more sense to be doing what you can in the game if you have more than one person to account for.

A question of my own though, what's with apple/strawberry pie? In both cases, the ingredients needed to make either are more filling than the products instead (at least if you factor in cooking the flour instead to get bread (+3)). It feels like there's no point to making these.

This is the 2nd game I'm playing with Minetest. I quite like the idea - survival + terraforming.

The idea of transforming lava source into water is a bit crazy but ok :)

I may make a pull request about the ability to burn wooden tools :)

Oh and any idea why my potatoes, tomatos don't grow past the first stage? It's been at least five in-game days.

Quiark wrote:Oh and any idea why my potatoes, tomatos don't grow past the first stage? It's been at least five in-game days.

Have they grown by now? The only time mine haven't grown is when they are too far from water or they are shaded by trees.
Give a man a fish, feed him for a day. Give a kid a fish, it's going to die.

Yeah it was the lack of water.

Here is my update with burnable wooden tools, finally they're useful :)
https://github.com/Quiark/hades_revisited

I don't know if it was on purpose, but it makes access to a couple of other items impossible as well. If you want the torches back:
Edit games/hades_revisited/mods/mesecons/mesecons_torch/init.lua
At "minetest.register_craft", just remove the "--" in all lines in this section. The recipe is there it is just commented out.

The prism furnace could be added to games/hades_revisited/mods/default/crafting.lua
Copy the function for the furnace, change the output to default:pfurnace and modify the recipe. Prismatic gems should be "travelnet:prismatic_gem", so if you want to require that in the center put it inside the '' in the middle line of the recipe.

Oh, interesting timing. Thanks for the update.
I noted that you can make a Microcontroller but not a Luacontroller which is used by e.g. the player detector (does it also work as item detector or was that element removed?).


I noted that you can make a Microcontroller but not a Luacontroller which is used by e.g. the player detector (does it also work as item detector or was that element removed?).

I think I will either rework or remove all mesecons-related stuff. It's just too complicated and I don't think it fits into the game well.

Not sure about pipeworks, probably needs a rework or a major simplification. I have different plans for this game. A lot of stuff in this game is still pretty chaotic, I'm not sure which direction it will take.
Last edited by Wuzzy on Thu Mar 07, 2019 16:06, edited 1 time in total.
My creations. I gladly accept bitcoins: 17fsUywHxeMHKG41UFfu34F1rAxZcrVoqH
Post Reply
84 posts