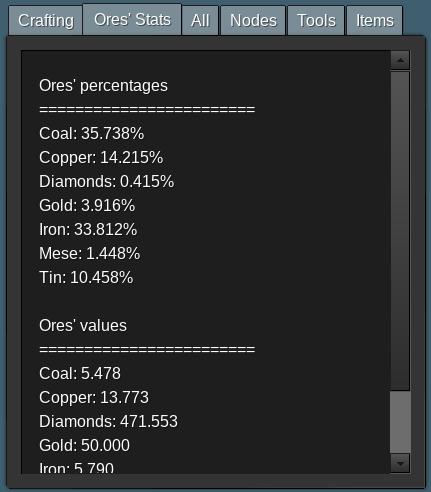 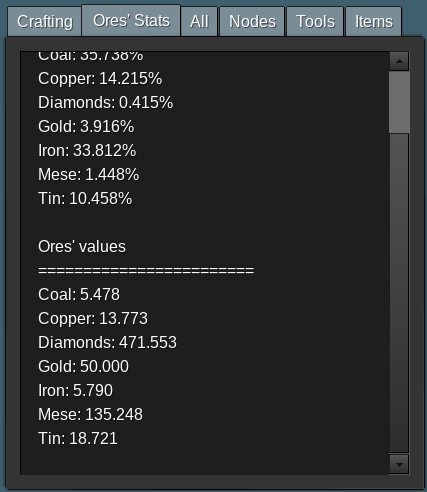 To update the page just switch to another tab.

Unzip the archive, rename the folder to ores_stats and place it in
../minetest/mods/

If you only want this to be used in a single world, place it in
../minetest/worlds/WORLD_NAME/worldmods/

GNU+Linux - If you use a system-wide installation place it in
~/.minetest/mods/

Nice! I've frequently wondered about the ore distribution percentages; usually when I'm trying to decide on craft recipes in mods, as I try to balance the cost with the usefulness.
Alexand(er|ra) Yst's mods

Thanks to both for your appreciation. :)

Indeed it can be used for other purposes: checking the effective percentage of a newly introduced ore or node, testing a map generator, and so on.

Currently it lacks a database: a text file in the world's directory where the collected data could be saved for later reference. I don't know how to deal with files input-output, thus at the moment nothing is recorded.

I've planned to extend the available commands, by introducing a converter; example:
-> /orestats diamond steel
<- "a diamond is worth X steel ingots"

If anyone is willing to help, s/he's very welcome.
My repositories: Codeberg.org | My ContentDB's page

The most checks does just a print() that is wrote to the logfile and redirected to chat. But some (if usefull) does write to world directory. For example the intllib_pot_file_converter.lua that you can use to look how writting files works. It is easy, just write strings as textfile-lines using the IO write method

Hamlet wrote:Thanks to both for your appreciation. :)
Currently it lacks a database: a text file in the world's directory where the collected data could be saved for later reference. I don't know how to deal with files input-output, thus at the moment nothing is recorded.

Thanks for your input, so far I'm rewriting the mod from scratch because I wrote it a month ago when I didn't knew about hardware colorization and some other things.

I've tried the mod_storage method, and I'm happy with it as there is no performance hit. :)
My repositories: Codeberg.org | My ContentDB's page

This version is meant to be used by singleplayers and/or mod developers.
The whole code has been rewritten to allow developers to easily and quickly add support for their own ores; it is self explanatory ("self commented") and broken into various sections (variables, functions, etc.) to make the customization process as easy as possible.

Before you think "I'll add <ore_name_here>" check this viewtopic.php?f=47&t=20105 because it seems that there's already a ton. :)
My repositories: Codeberg.org | My ContentDB's page

I am interested in your mod, but I fearr I will ask some questions now to understand it, that unmask me as very uninformed.
Is the map generated completely if you create a new world?
Or are subunits like mapchunks and areas generated if the player enters them for the first time?
If you change the distribution of ores in a mob after creating a new world, will the changes take effect?

Nordal wrote:I am interested in your mod, but I fearr I will ask some questions now to understand it, that unmask me as very uninformed. [...]

You should ask those questions to "Mr. Mapgen" (as Rubenwardy once called him), that is, paramat.
I only have a vague idea of how map generation and ores' distribution works, someone could skin me and put me into a barrel of salt, should I write something not exactly exact.
My repositories: Codeberg.org | My ContentDB's page

Nordal wrote: Is the map generated completely if you create a new world?

No, that's not possible. Even large servers which have run for a long time have only a tiny fraction of the possible map generated - and that takes up several GB of space.


Nordal wrote: Or are subunits like mapchunks and areas generated if the player enters them for the first time?

That's how it is: When a player comes near or a mod initiates generation, that mapchunk will be created and stored in a database.


Nordal wrote: If you change the distribution of ores in a mob after creating a new world, will the changes take effect?

They will take effect - in newly generated mapchunks. A mapchunk is usually 5x16 nodes wide in each direction. Already generated mapchunks are not affected. Thus, if you add a new mod that adds new things at mapgen time to an already existing world, you've got to explore new land in order to see those changes.
A list of my mods can be found here.

Thank you very much Sokomine! Your answers exactly meet the point. That's the informations I needed. :)

So... you are selling 1 gold ingot for 99 dirt
or maybe one chest filled of cobble for a diamond...
or exchanging a steel block for 10 coal blocks
or 10 apples for 2 steel ingots
maybe you need this: 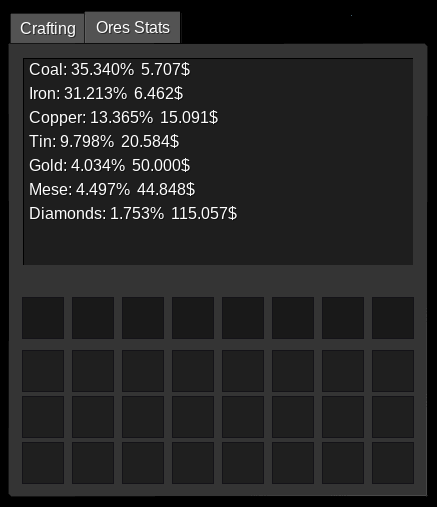 EDIT: the current version doesn't have this feature, just in case...

ores_stats_next.png
(8.44 KiB) Not downloaded yet

I used it short,
after digging about 50.000 nodes to get a statistic about this (but I have also mithril and moreores) to make a more fair XP digging point system, depending on the % based on diamonds.

Sure, helpful, to know how much is something worth (depending also on depths digging)
The Idea is good, but missing ores, and looking through the code I didn't feel to be able to enlarge ... it
Human has no future (climate change)
If urgend, you find me in Roblox (as CNXThomas)

This mod will be completely rewritten, it is old and its code is not very good.
I will try to make it easier to add third party ores' mods, probably I will re-add native support for More Ores' silver and mithril because it seems that More Ores is widely used.
My repositories: Codeberg.org | My ContentDB's page