Remove the gray stuff, keep the island, scale the "O" down and it becomes perfect.
My stuff: Projects - Mods - Website

Gray stuff? you mean remowing everything or the little dots? there are here for purpose though!

Why not making the island bigger? well, i should be able to scale down the O it'll be harder.
ＯＭＩＣＲＯＮ - pre-release 0.7 "Tweaky Update"

After half-a-century and an hilarious playword (menupdate: menu - update got it, uh? lol! end my life pliz.) here's a new update. It includes not enough content for the time I spent of it but nevertheless, I hope you'll like it.
*red is important.

Note: I received complaints about GLSL shaders version being unable to run well on some systems like Mac or Linux... If you have such a problem, please read the top part of this post to avoid further problems.

Have fun with the 0.6 update! If you encounter problems tell me, I cannot make the game work for you if you don't tell me!
ＯＭＩＣＲＯＮ - pre-release 0.7 "Tweaky Update"

Is the everyone dead or I missed something?
ＯＭＩＣＲＯＮ - pre-release 0.7 "Tweaky Update"

Well why should I have replied ?
My stuff: Projects - Mods - Website

Omagah it's alive. No I know, I just feel a bit alone and forgotten ':)

EDIT / DEVLOG: I had the confirmation of an idea while playing an old rubbish but lovely version of minetest. The mapgen had an intereting feature I already thought to but never really applied because I found it ugly (In fact it's not ugly at all). I can combine the actual noise that generates the terrain we know and I can cross it with another 2d noise. When the new noise is higher than, for example 0.7, the original noise gets added up/multiplied by 8. It generates small cliffs and allows to create mountain like places.

Other idea : Apply a noise to the noise.
Seriously, if you have a noise, you have a bumpmap, then you create directional vectors & a normalmap and then apply a 2nd noise multiplicating it with those vectors.
My stuff: Projects - Mods - Website

It's already being done! but thing is the terrain tends to get the same everywhere with this technique. The noise needs to vary!

EDIT / DEVLOG: Just tweaked randomly the noise and found a quite interesting result: a lower land, with some higher isolated hills, generally more massive and uncommon than previous noises! I really like it! 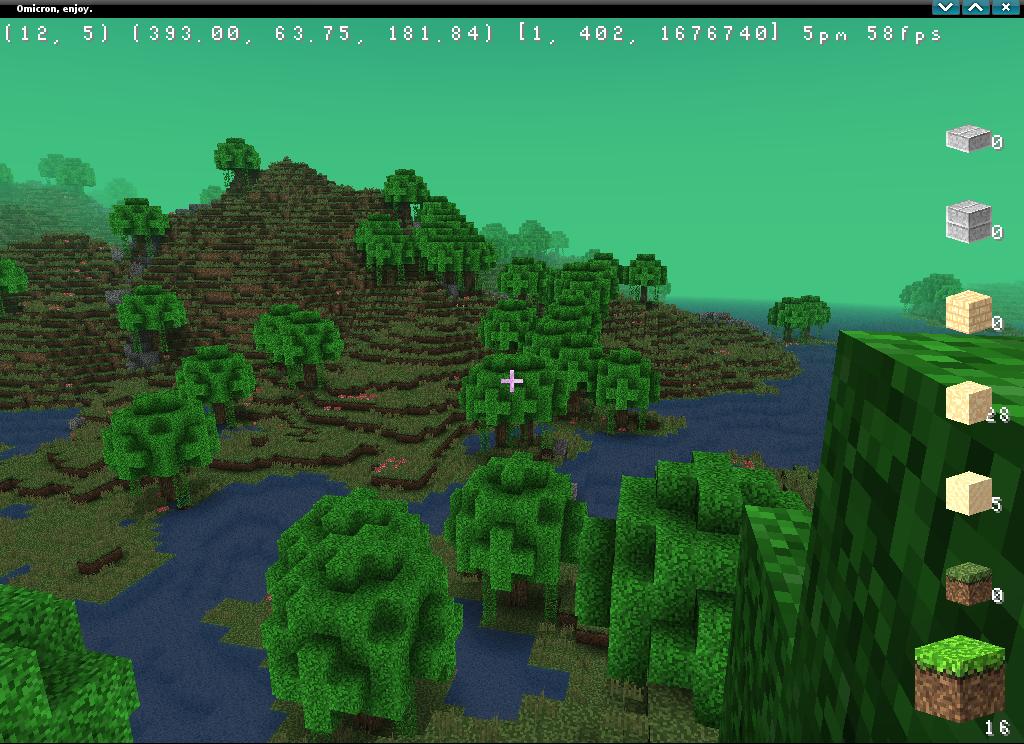 screenshot-new-noise.jpg
(131.99 KiB) Not downloaded yet

Thanks tumeni :D I'm really fond of this noise because it generates tiny bits of land at water level. It makes the coastline less smooth and gives a real nice effect in swamps. Minecraft used a similar technique in swamps I think, because they both look really similar!

DEVLOG: Added an exit button to the menu (which works) and finally found out the source of the segfault in the closing sequence! It was simply a function killing the window after the window was already killed. The function was then referring to something which didn't exit and this caused the segfault. Well, now it's solved ;)
ＯＭＩＣＲＯＮ - pre-release 0.7 "Tweaky Update"

This looks amazing! Will try it out soon.

tell me if you have problems to compile, the game segfaults at start on some systems for no apparent reasons :|
ＯＭＩＣＲＯＮ - pre-release 0.7 "Tweaky Update"

Well, judging by the current state of the game, I don't think this has a high priority ;)
At first, he'll probably be making some good mapgen, some more blocks and an inventory.
My stuff: Projects - Mods - Website

and a windows build would be a great thing... i do not have linux on all my computers...

PowerOlive wrote:like the minecraft in 2013
...
Do you plan to add moving things like cloud animals carts?

It's the whole thing :D

clouds are there already, they'll maybe move one day… animals and entities will obviously be Added one day or another, but not soon. And btw, carts are just entity rided by other entities, so it shouldn't be added far after entities, however, rails will be harder to make so idk.

LMD wrote:Well, judging by the current state of the game, I don't think this has a high priority ;)

I was about to simulate an Overeaction but your quite right about this.


At first, he'll probably be making some good mapgen, some more blocks and an inventory.

Yeah, I'm making a lot of mapgen and GUI as you can see on the discord. Inventory will be extra hard to make I think.

About Windows builds:
My Windows is in such a state of buggyness and incompetency to handle code-related-stuff that I cannot compile any sort of things on my PC as all PATH doesn't work at all. Python doesn't work at all, nor does Java unless helped really hard and C/C++ compilers are just vomiting random things about: "not being installed" and stuff like that. Nothing works on my PC as it normally should, I must also admit half of Windows is radically from a machine to another.

For example, I have someone with the exact same configuration as me and almost the same apps installed apart from games: his PC boots in 2 minutes, mines on 17 secs. Just this.


Thanks everyone for still being interested by Omicron ;)
ＯＭＩＣＲＯＮ - pre-release 0.7 "Tweaky Update" 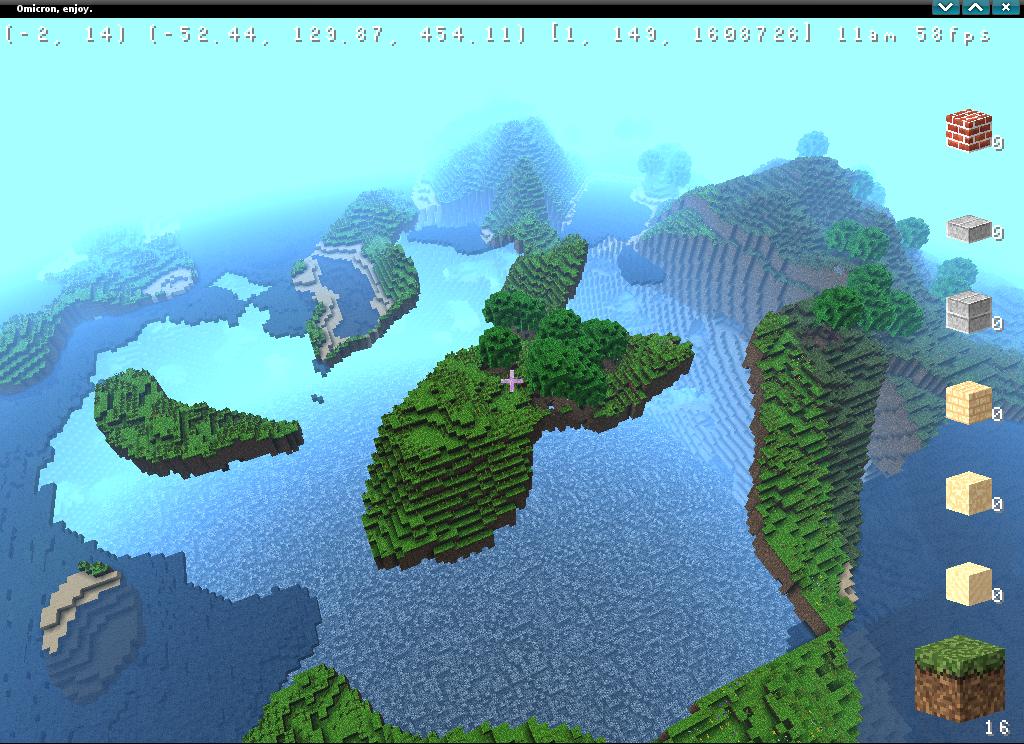 Made this by error, gives me ideas :D 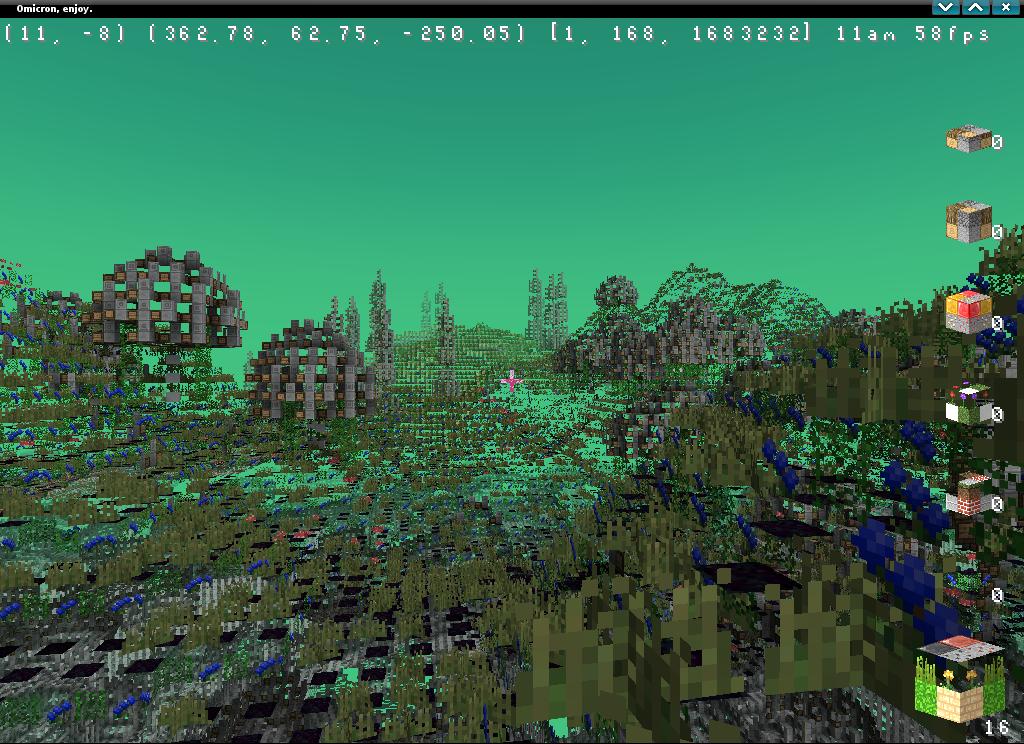 Another blatant example of why I take 7 weeks to do anything.

screenshot-yay.jpg
(166.78 KiB) Not downloaded yet

screenshot-sicc.jpg
errors + me = funny things
(152.85 KiB) Not downloaded yet

DEVLOG: After lacking time to work and post, I'm finally back... and I made the configuration working just fine (at least the config.txt part, the edit from in-game could prove to be tricky). You can now edit the game's properties and render option without having to recompile the whole game. The game also has a basic config tab, which allows you to see the current game config while in-game, and in the future, edit them directly! 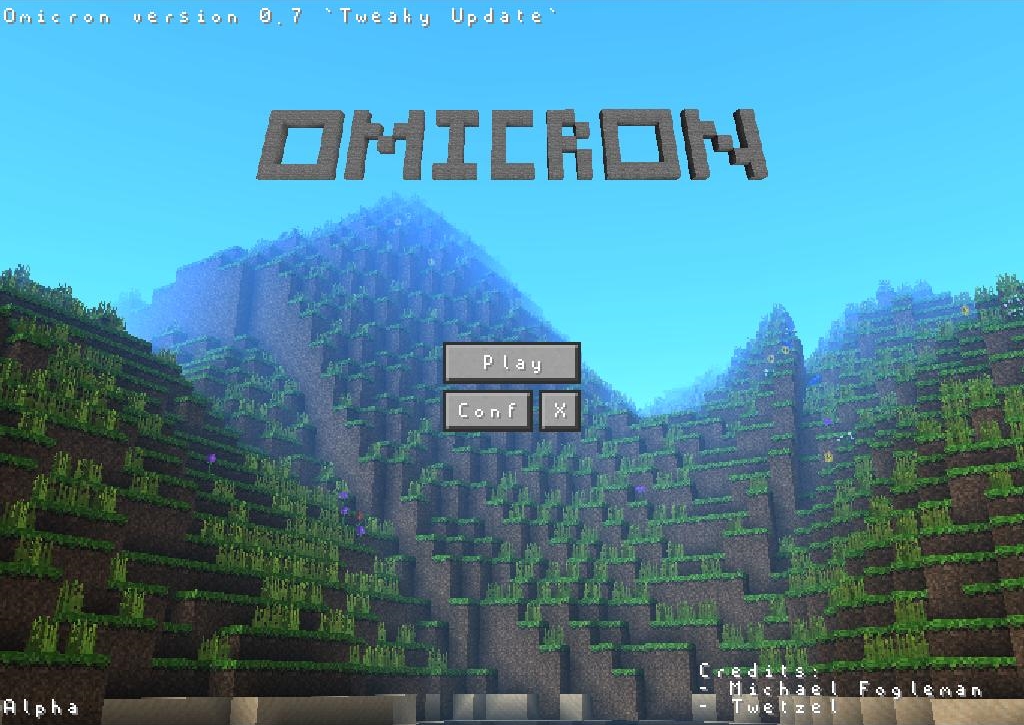 DEVSTATUS: Hello everyone! I hope you're having a great day. This project I started thinking about almost 3 years ago will soon reach its 1st anniversary (the 14th of July, funny thing I chose this date as it's France National Day, I sure won't forget that!).

I wanted to take a moment to tell how grateful I am of all the help and support the game has received. It means more than you'd think to me! I've certainely not been a perfect dev (not at all), I didn't listen enough to your clever advices nor I did help some people struggling with things like compilation. But I hope you will forgive me!

This will soon be one of my longest projects and I'm glad to see it keeps going strong, despite my lack of time and motivation (sometimes) to work on it. Omicron is really the big project I always wanted to work on, and it wouldn't have been possible without you guys, so, thank you!

Have a remarkable day!

After another long hiatus caused by important exam, I'm pleased to bring you the "Tweaky Update" for omicron! Many, many hours of work went into, yet I'm not satisfied with it. Experience better performance and improved GUIs with omicron 0.7!

As Always I hope you enjoy this update and solves any issue you had. I'm working actively on compilation issue which seem to multiply, alongside the apparent lack of updates/fix for MinGW Under Windows, causing some issues. Documentation will also be revised and greatly simplified to give a better expereince to the user.
ＯＭＩＣＲＯＮ - pre-release 0.7 "Tweaky Update"
Post Reply
214 posts