Set home position and then go to it using the inventory screen. 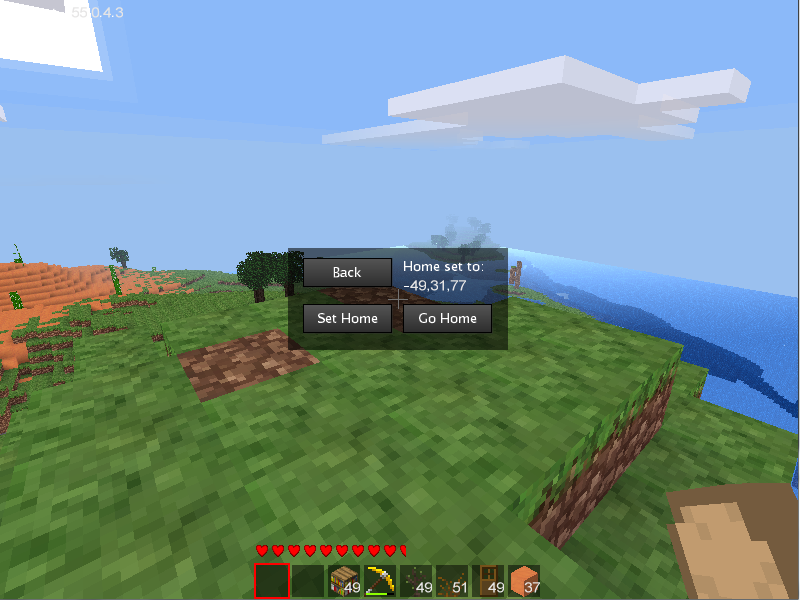 This module is open source, so it's distributed freely. If you find it useful then I ask not for your wealth, but simply to spare your time to consider the world we share by watching Earthlings, a multi-award winning film available to watch online for free. A must-see for anyone who wishes to make the world a better place.

Very helpful. Unfortionately it collides with the bag mod. Would it be possible to use both?
A list of my mods can be found here.

get the latest version of bag mod, they work together just fine (thanks to inventory_plus). Same with Armor, that should just drop in too with no conflicts.
my minetest stuff

Thanks! Very nice and helpful.
A list of my mods can be found here.

This is awesome! But some of my users prefer the commands, while others prefer the graphical interface. I tried to write a plugin that hooks into yours and adds commands, but your local variables cannot be accessed from outside your script. So I had to build a patch. Feel free to integrate it or don't, or modify it if you don't like it.

Adding this to the end of the file adds the /home and /sethome commands, both without arguments, that function as you would expect, and use the same set of home locations as the rest of your plugin. I had to do some wacky conversions, because the chat command API returns a name, but your plugin expects a player object. So, this takes a name, converts it to a player object, and passes it to your function, which immediately converts it back into a name. I should have probably come up with something more efficient, but hey, at least it works.

Hope you dont mind but I've changed the mod slightly so that clicking the Home button automatically takes you to static_spawn or 0,0,0 if it's not set... A few newbs on the server keep getting lost and ask to take them back to spawn, this way your mod does it for me

[The extension lua has been deactivated and can no longer be displayed.]

When this already is open, I'd like to make a little correction too.

This will teleport players into the node below them.

EDIT: another suggestion: Only allow players with interact to set their home.
Last edited by Krock on Sun Feb 16, 2014 14:51, edited 1 time in total.
Look, I programmed a bug for you. >> Mod Search Engine << - Mods by Krock - DuckDuckGo mod search bang: !mtmod <keyword here>

Do you can add the option (on/off) in init.lua for time limit to using home button, for example player will can use button "home" not more than once every 20 minutes. I think it is a good idea add the option to enable teleport home with a time delay. I mean if player press "Home" he will teleporting after 5 seconds timeout, it will very good for pvp servers.
Post Reply
8 posts • Page 1 of 1