This Minetest mod adds a red and a white dice to the game, both in form of a full placable block.
The dice can also be rolled via rightclick.
The dice also come with a full sound set, with placing, punching and nice rolling sounds.
The “purpose” of this is just for fun. It is nothing meaningful. ;-) 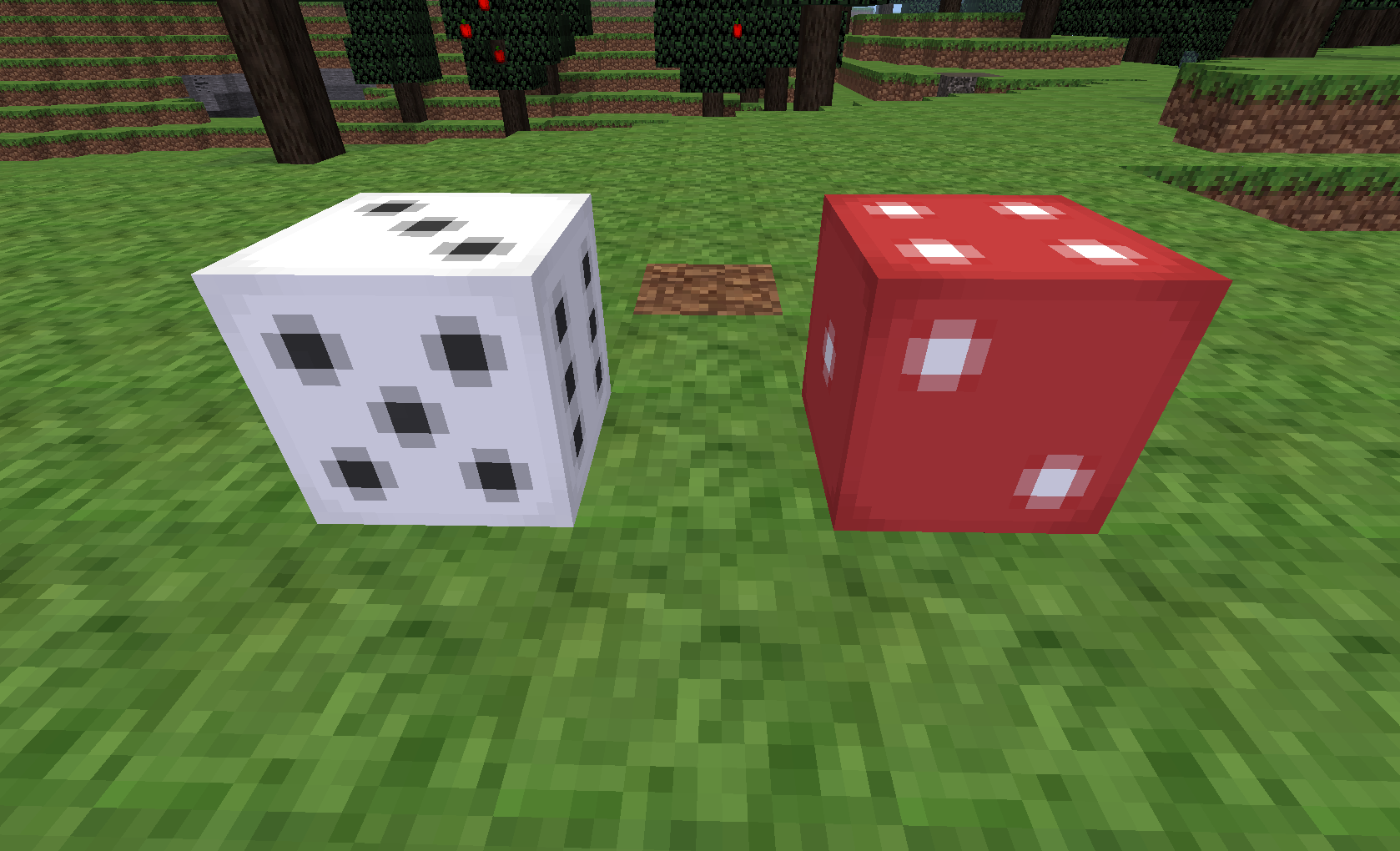 Basic crafting
To craft dice, you have to place any kind of wood in a 3×3 grid like this:

The result is 5 white dice.
The crafting recipe resembles the number 5 on the dice. :-)

Color crafts
If you use the “dye” mod, the following additional shapeless recipes are available: How to use
If you place a dice, it will face a random direction and turned randomly.

You can mine dice in half a second without any tool, but it can be faster with “choppy” tools (i.e. axes).

To roll the dice, press the use key (right click) while pointing to it. So you don’t have to mine and place it again.
If you don’t want to throw the dice but want to build something to it, you have to rightclick it while you hold the sneak key (shift).

Careful: The dice are flammable!

Project page
For developers: The Git repository project page is located at:
http://repo.or.cz/w/minetest_dice2.git

Old “dice” mod
There was a similar mod, but it was hosted on Ubuntu One, which is dead now. >_>.

The first step toward CasinoTest!

Nah, just kidding. But nice mod! The only thing I could really think of on how to make the random placement be active immediately would be to place an invisible node first, then use minetest.place_node(pos, {name="diename", param2=yourRandomNumber})

However, that's pretty hacky......
Nam ex spatio, omnes res venire possunt.
Why let the ground limit you when you can reach for the sky?
Back to college now, yay for sophomore year schedules. :P

Version 1.1 is there. This is a tiny update, I just added mod.conf and changed the readme file to Markdown format.
I also added a Git repository (see first post).
My creations. I gladly accept bitcoins: 17fsUywHxeMHKG41UFfu34F1rAxZcrVoqH

Version 1.2 is there.
This is mostly another cleanup release to update some metadata.

Very cool - Yahtzee or Farkle, anyone?!?

Changes:
- Allow to use dice as fuel in furnaces
- Make mod compatible with Documentation System 0.7.0
- Fix mod not working with both inttlib and mod security enabled
- Prevent dice being able to be destroyed by cave generation algorithms
- Minor refactoring
My creations. I gladly accept bitcoins: 17fsUywHxeMHKG41UFfu34F1rAxZcrVoqH

This is neat! Would be cool to also randomize faceup side on actual throwing of item, not only when right clicking.
Mods | Support Mesehub: bc1qluuests9rxmlnvpjrhsnyjg9ucwy6z3r0y3srw

It would be cool if the dices dropped randomly as well.

I think this is not possible without a lot of hacking and it would be not worth the effort.

The dice get a random face when you place it, too.
My creations. I gladly accept bitcoins: 17fsUywHxeMHKG41UFfu34F1rAxZcrVoqH
Post Reply
13 posts • Page 1 of 1